This is the first lesson about Persian alphabet and short vowels. For those who are, to some extent, familiar with these basics of Persian language, it might seem redundant. Nevertheless, as mentioned above, we are going to learn Persian from the very scratch that I think will be more helpful. Little by little, we will make great progress to begin advanced Persian that will let you communicate with others in Persian in both oral and written. In near future, you will find yourself speaking, reading, and even writing in Persian. These all can only be achieved through practicing these simple steps, which make learning as easy as possible.

Like anything else, you’ll have to learn some basics first, and it’s inevitable! In these lessons, I have tried hard to simplify the rules as much as possible. However, it’s a new language for you and requires at least a little bit of effort if not very much! All you have to do is be patient and follow the instructions one by one. In the meantime, we are going to learn the Persian letters and the way they are pronounced and of course we will do it step by step to make sure that everything is quite clear. After you got a little familiarity with some basics you would see that it’s really as easy as 1, 2, 3.

1. Unlike western languages, Persian is written and read from right to left.

2. Persian consists of 32 letters. Some of them have small and big form like A / a in English while others have only one form. You don’t need to memorize all of them now. Just be patient enough to learn it one by one. In the end you’ll see your progress.

3. As you know, English words cannot be pronounced without these five letters: A, E, I, O, U, and sometimes Y as in BY. These are called vowels. In Persian, however, there are no letters considered as vowels. Instead, we put some sounds on or under the letters to make them readable. There are six main sounds in Persian recognized as vowels, three short vowels and three long vowels. Remember that these are not letters. These are sounds that come with letters and make them pronounceable. Today we will learn short vowels.

The representatives (symbols) of these sounds (vowels) are as follows:

Do you see the small symbol on A? If this sign sits on a letter, the letter will be pronounced as /æ/ in dad.

If this sign, which is exactly written in the same way as in number one, sits under a letter, it will be pronounced as /e/ in set.

If this sign, which has a circle on his head, sits on a letter, it will be pronounced as /o/ in border.

Now that you are familiar with these three short vowels you are ready to learn a couple of letters to practice with these sounds.

Today we are going to learn three big letters as well as their small forms.

This is the big letter ‘B’ in Persian. In the meantime, you don’t need to learn how to write it. We are just trying to pronounce it with the help of those three short vowels above. Ready? Don’t worry. I’ll write it for you. All you have to do is pronounce it.

This is /bæ/ as in battery.

This one is /bo/ as in border.

Try to repeat it for a couple of times. 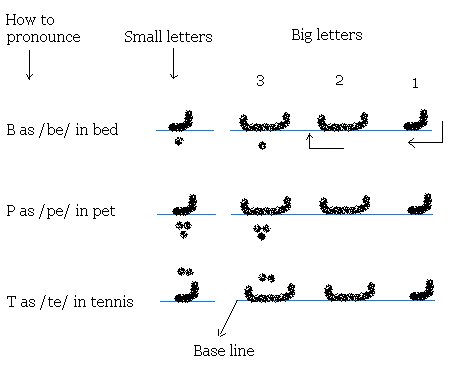 This one is the small letter ‘b’ in Persian. Now try to pronounce this letter in the same way. Don’t forget to read from right to left. You will say.

Don’t be afraid! It’s not that much difficult. Don’t believe me? Click here to listen.

This one is the big letter ‘P’ in Persian. Try to pronounce it with the short vowels.

This one is the small letter ‘p’ in Persian. Try to pronounce it. Don’t forget to read from right to left. You will say:

This one is big letter ‘T’ in Persian. Try to pronounce it with the short vowels.

This is the small letter ‘t’. Don’t forget to read from right to left. Try to pronounce it.

Let's see how we can write these letters.

Ok. With this we come to the end of lesson one. I hope you have enjoyed it.

I like the way you present the Farsi alaphbet.
Reply

Thank you very much for your like and support.
Reply

Hi Salam, feeling very positive after first lesson, each things are in deep so feel interested more. And thank you pooria sir for suggesting this strong & beneficial link. (Tashakur)!!! And all team plz upload videos on YouTube also.
Reply

You're greatly welcome dear Shahrukh, so happy to hear your positive feedback. We are working on that and surely will upload our videos on YouTube soon.
Reply

Hi, I've really enjoyed the first lesson and am excited to learn more. Will there be plans of uploading all the videos which you have links to in this lesson? When I select them, the message says the user has removed them.
Reply

Thanks for your feedback, we are so please to hear that you liked this lesson. Yes we are having plans for uploading videos and try to make that happen soon.
Reply

I love the FEELING of having a real Farsi teacher personally guiding us here, and patiently encouraging us take our time to build a solid base. It makes these first "baby steps" more easy and gives confidence that we can learn the basics even though the alphabet alone looks challenging.
Reply

So glad you find these lessons useful and guiding. In case of any discrepancy or problems, please feel free to contact us via email or our social media pages.
Reply